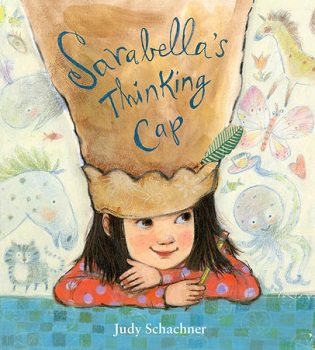 Sarabella is always thinking—conjuring, daydreaming, and creating new worlds from her imagination. There is so much going on in her head that it can barely be contained. But there are times when daydreaming is decidedly not a good thing—like when you’re supposed to be doing multiplication tables. Luckily, Sarabella has an understanding teacher and with his encouragement She comes up with her own idea to show everyone who she is.

Watch Judy draw and talk with The New York Times Books in this Facebook video.

Reviews
"Punning on the plural of cerebellum, Schachner introduces a girl who is at her happiest when she’s alone with her thoughts. With her “feet on the ground and her head in the clouds,” Sarabella is beloved by her passionately creative family, but her teacher, Mr. Fantozzi, hopes she’ll find a way to focus, as well as share her thoughts. Inspired by a classroom assignment, Sarabella crafts a thinking cap made of paper, magazine clippings, stickers, and stamps, allowing her classmates to see the swirl of ideas in her head. Readers have much more access to Sarabella’s thoughts thanks to Schachner’s sprawling mixed-media collages, themselves a tangle of imagery and loosely formed associations: in one jam-packed thought balloon, lithographic images of sea turtles, sheep, and a cabbage jockey for space with hand-drawn ants, words in English and French, and a cartoon string bean. Mr. Fantozzi is a memorable force in Sarabella’s life: he never shames her imaginative wanderings and instead celebrates her inquisitiveness. Readers, particularly introspective types, are sure to see the magic in Sarabella’s perspective."—Publishers Weekly

"This gentle book provides support for every child who daydreams in school and a wake-up call for her or his teachers…A lovely celebration of creativity and a different learning style."—Booklist

"This is the sweetest read aloud for any child, but particularly for the little daydreamer in your life."—Geekdad

"More than a tribute to a child’s imagination…A tender, sensitive tribute to those introspective students in a classroom, who don’t always quite fit the standard educational mold–a welcome thing, indeed."—Seven Impossible Things Before Breakfast

"This is a great example of the creativity in divergent brains."—Imagination Soup

"This is an exceptional book! It reveals the inner and outer world of a child with attention challenges, presenting this issue as a gift rather than a disability. The fanciful watercolor illustrations are charming and fun. This book is a valuable resource for any child who struggles in school. It could serve as a valuable tool to encourage understanding and respect of individual differences in the classroom as well."—Culture Honey 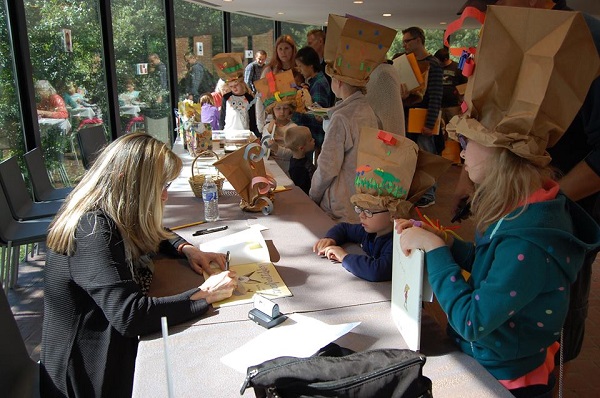