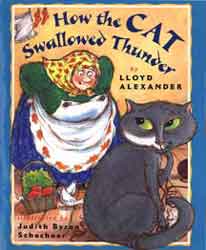 When Mother Holly leaves to do errands, she warns Cat to behave himself. But faster than a cat can pounce, he is up to his whiskers in trouble! One crazy mishap leads to another, until the little cottage is in a very messy state. Cat is busily tidying up when he hears Mother Holly coming up the path. He spies a tiny piece of corn on the floor and quickly swallows it. But it’s no ordinary corn, and suddenly Cat notices that he is making a very curious rumbling sound…

"Like the sorcerer’s apprentice, Cat has more than he can handle when Mother Holly leaves him in charge of her cottage…Children will enjoy spotting carved owl bedposts, cat nesting dolls lined up on a windowsill and, especially, the two mice who appear on each page."—Publishers Weekly

"Children and grown-ups alike will revel in the lighthearted, colorful illustrations and chuckle over Cat’s clever antics."—Children’s Literature

"Professed cat lovers Alexander and Schachner have produced a truly charming story that’s part fantasy and part fond tribute to their favorite household pet…Alexander’s original folktale…coupled with Schachner’s homespun, crazy-quilt illustrations—everything in Mother Holly’s house is stuffed with down and stitched by hand—the result is pure enchantment. Children will enjoy this book when read aloud as much as they will when they curl up with it on their own."—School Library Journal

"[The] story has the ring of a traditional tale, but it’s Schachner’s bold illustrations that make Cat spring to life, with several double-page spreads of the cat pouncing, leaping, or standing on his head. The oversized format and lively story line make this a fine read-aloud for a group, although there are also tiny hidden details (including a pair of miniature trouble-making mice and a portrait of Alexander on the wall) that will reward those who read the book one-on-one with a child."—Kirkus Reviews