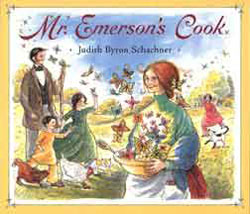 This story, which weaves fact and fiction, is as rich and satisfying as the warm apple pie that Annie cooks. With lyrical language that begs to be read aloud and illustrations full of whimsy and warmth, this book extols not only the extraordinary Mr. Emerson but the power of the imagination.

Reviews
"Readers will be swept up in this fascinating story…that perfectly captures the great poet’s nature."—Kirkus Reviews

"A whimsical story filled with imagination and poetic imagery."—Booklist

"Schachner creates a vivid introduction to the venerable New England philosopher through the eyes of Annie Burns, the Irish immigrant girl who comes to cook for him and his family…Loose sketchbook-like drawings with watercolor wash capture the details of the early-19th-century setting, spiced with comic touches; in the Sunrise Pie scene, Emerson stands on a chair holding his slice, while his wife, children, Annie and a parrot perched on his arm look on with delight. An afterword providing additional background about Emerson, Thoreau and Annie Burns (Schachner’s own great-grandmother) tops off this meaty course, one part humor and one part history."—Publishers Weekly

"The warm watercolor illustrations are done with a light touch and have a celebration of natural goodness to match the spirit of the text. This is for readers who enjoy Michael Bedard and Barbara Cooney’s Emily (Doubleday, 1992), a story about a literary figure whose writings are often beyond the reach of a picture-book audience, but whose generosity of spirit is for everyone."—School Library Journal

"Delightful brown line drawing in sunny watercolors lend a warm and light touch to this book, an introduction to a famous American author, or another story about the values of imagination. "—Children’s Literature